MOTOHIRE SPAIN ON OUR TRAVELS!

Motohire Spain’s business usually slows down a little in July and August and that’s why we thought it would be a good time to hit the road on one of our BMW GS1200s to see friends in Úbeda and cross the fabled stretch of the A-337 that crosses the Sierra Nevada from La Calahorra southwards to Laroles. 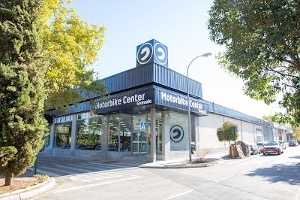 First, some advice about motorcycling attire in July in Andalusia: don’t wear shorts! Yours truly set off in shorts because it was so hot in Teba, where Motohire Spain keeps its bikes ; 38º C or so. By the time we were heading eastwards out of Antequera towards Granada, it was 42º C and my little legs were slowly roasting due to the engine and Andalucia heat combo – so much so that we had to pull over for some leg-cooling and refreshments. Noelia, my intrepid, and much wiser pillion cum camerawoman had of course set off in proper attire and needed no such interruptions.

In Granada, we stopped at the excellent EuroBikes outlet where I invested in some much-needed summer trousers, whose meshed construction provides aeration to the leg whilst protecting it from excessive heat. Not to mention protection in case of a tumble. From there, we made our way up to Úbeda via Guadahortuna, where we discovered quite by chance the extraordinarily delicious pastries and cakes of Casa Calitos. 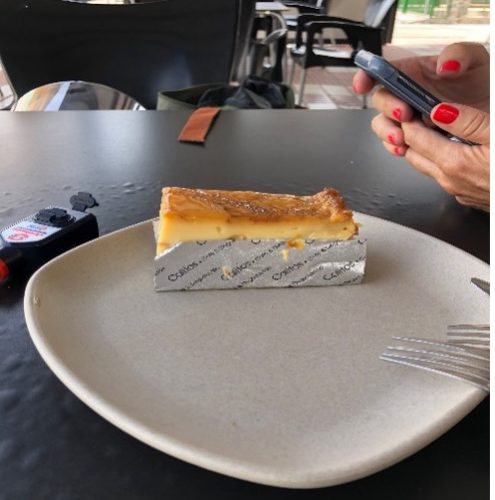 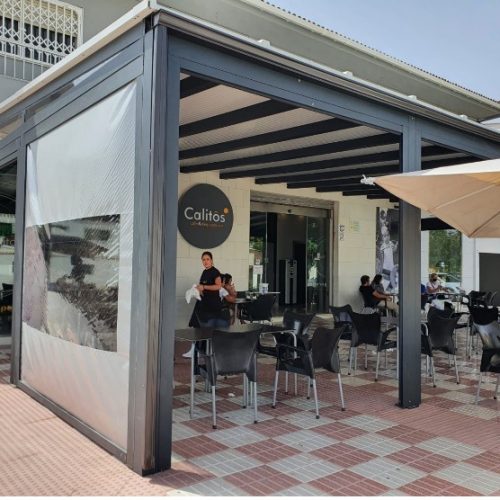 It was only later, with our friends Angel and Maria José in Úbeda, that we learnt that Calitos is well known in the Jaén region, with people and small businesses driving long distances to get their Calitos fix. Put it this way, it was so good that on our way south next morning, we stopped there again for seconds. We highly recommend this place, whatever mode of transport you happen to be using.

The A-401 from Guadahortuna to Ubeda is just a gorgeous piece of road. Andalucian road quality is second to none, and as a Briton who has lived much of his life in both Britain and France, I can categorically say that road quality here is better than in both of these countries. The tarmac aka asphalt aka blacktop (asfalto in Spanish) is grippy and smooth and you will very rarely find the potholes that bedevil smaller British and French roads. Anyway, inter-country road comparisons concluded, let me just reiterate that the riding on these roads will bring a big fat smile to your face.

We overnighted in Úbeda, one of Andalucia’s 7 UNESCO World Heritage sites, but possibly better known for being Andalucia’s olive (and olive oil) capital. It is also home to the quite stunning Úbeda Parador, whose interior courtyard is shown here. Paradors are state-run hotels and are often located in adapted castles, palaces, fortresses, convents, monasteries and other historic buildings. There are currently 98 Parador hotels in Spain ; each is unique and with its own remarkable history.

On day 2, after a fortifying cheese-cake stop at Calitos, we headed southwards towards Guadix where the low dusty hills bring to mind America’s Wild West – and it is indeed in this region that the famous Spaghetti westerns featuring Clint Eastwood were filmed. We biked through the hazy hot plains surrounding Guadix and besides the eerie Andasol solar power station, whose curved mirrors cover close to one and a half million square metres, providing power to thousands of homes and businesses.

We stopped for fuel and water in La Calahorra, the last village before the crossing of the Sierra Nevada begins. The temperature dropped as we climbed and the GS took it all in its stride, a road-eating colossus bestriding Andalucia, imperturbable in the changing conditions. After a long hot ride down the other side, we made it to that day’s destination, Capileira in the southern foothills of the Sierra Nevada. A 20 minute walk took us down to the Rio Poqueira where an invigorating dip awaited us.

Capileira has a charming bohemian vibe, and the incongruous Indian restaurant at the top of the village provided us with an excellent dinner of saag paneer and naan bread.

On our final day, it was with a heavy heart that we headed homeward, but not before some more fabulous riding, particularly on the MA-3107 between Velez-Malaga and Colmenar, and then between Antequera and El Chorro, on the 343, which has to be one of the most picturesque roads cum track (I partly retract what I wrote earlier about potholes as we had some beauties on this stretch, but it is a tiny road) in all of Andalucia. It ends up above El Chorro, which is the terminus for the train from Malaga to the famed Caminito del Rey and where walkers finish up at the end of the Caminito itself (the Caminito del Rey is Andalucia’s 2nd most visited attraction after the Alhambra in Granada, and worth every penny – though not for those suffering from vertigo). El Chorro is also a 20-minute bike ride from Motohire Spain’s warehouse in Teba for those who feel like mixing up the 2 activities. This is a must-see stop on one of Motohire Spain’s tours, be it guided or self-guided.

After a final lunch stop near the El Chorro lakes (a good spot for some wild swimming), we headed back to Teba, energized and wanting more.

A note to readers: our fleet is not composed solely of GS1200s. We have 700s and 850s for those not requiring so much power, or who prefer a lower seat; we have a selection of Triumphs (700 to

1200cc)  for those not married to the BMW marque, and we will be getting a few GS1250s in the autumn. Do contact us at motohire spain for more details, or write to me directly at tristram@motohirespain.com or send a Whatsapp to +34 622 173 810. Happy days await you!

Motohire Spain are here for all of your moto hire needs across Spain. We tour across Europe and Morocco.